The Philadelphia Eagles enter the second season of the Nick Sirianni and Jalen Hurts era after a solid 2021 campaign. Only seven teams, including the Eagles, are returning their head coach, coordinators, and starting quarterback.

The Eagles have the third-most favorable schedule this season as their opponents had a combined .464 winning percentage last season. To start the 2022 season, Philadelphia will face the Lions, Vikings, Commanders, and Jaguars. The Eagles will see some familiar faces in Weeks 3 and 4 with former quarterback Carson Wentz in Washington and former Super Bowl winning head coach Doug Pederson in Jacksonville.

To say expectations are high regarding Jalen Hurts would be an understatement. The third-year quarterback is entering a pivotal season for his standing with the Eagles. Hurts can establish himself as the team’s franchise quarterback by taking strides in his development as a passer.

According to Next Gen Stats, Hurts averaged nine air yards per attempt, which was the fourth-highest in the NFL last season. His 62 deep passes, which ranked eighth in the league, show he has the arm strength and aggressive mentality to take downfield shots. However, Hurts had a 57.7 passer rating on attempts of 20 or more yards, ranking 28th among QBs. He could take a step forward in efficiency on his attempts downfield this season.

Hurts is an outstanding athlete who was the third quarterback in NFL history to lead his team in carries (139), rushing yards (784), and rushing touchdowns (10). He’s also the only quarterback since 1950 with 4,000 passing yards and 1,000 rushing yards in his first 20 starts. The Eagles led the NFL in total rushing last season, with Hurts leading the way.

Nevertheless, Hurts might not have to run as often this season after the team acquired Pro Bowl wide receiver A.J. Brown in the offseason. The Eagles acquired Brown in a draft night trade with the Titans and proceeded to sign the veteran wide receiver to a four-year, $100 million extension.

Brown is an explosive playmaker who is tough to tackle and has averaged 16.2 yards per reception since 2019. Last season, he averaged six yards after the catch per reception, according to PFF. That is a significant difference from what the Eagles got from their receiver room in 2021, which averaged 4.4 YAC as a group.

DeVonta Smith was the Eagles’ best wide receiver last season as he was the first to lead the Eagles in receiving since Keith Jackson in 1988. Smith and Hurts’ friendship from their time at the University of Alabama translated to a successful duo last season.

Meanwhile, on the other side of the ball, the Eagles had a stout run defense but weak pass defense last season in their first year with defensive coordinator Jonathan Gannon. However, the group found their way late in the season, as the level of competition diminished. But their performance against Tom Brady and the Buccaneers in the postseason failed to inspire confidence.

The Eagles added to their arsenal with veteran free agents Haason Reddick, James Bradberry, and Kyzir White to remedy their defensive issues. They also drafted two plug-and-play starters from the University of Georgia in defensive tackle Jordan Davis and linebacker Nakobe Dean.

Darius Slay has addressed the Eagles’ long need for a top-tier corner, becoming a key playmaker over the past two seasons. Slay had an 83.9 coverage grade in 2021, ranking fourth in the NFL among qualifying corners, per PFF. Avonte Maddox has also become an established slot corner for the Eagles’ defense and received an extension last season.

Slay and Maddox will be joined in the secondary by Bradberry, who signed with the Eagles late in the offseason. Bradberry played for the Giants last season after beginning his career with the Panthers. Bradberry has the most passes defended since 2018, with 62 deflections.

Lastly, local standout Haason Reddick is an explosive edge rusher who led the Panthers with 11 sacks and 18 quarterbacks in 2021. Reddick joins a talented Eagles defensive line that features two legends in Fletcher Cox and Brandon Graham. Reddick began his career with the Cardinals before reuniting with former Temple head coach Matt Rhule in Carolina.

The Eagles will kick off the 2022 regular season on Sunday afternoon against the Lions at Ford Field. Eagles fans hope that year two of the Sirianni-Hurts era brings a playoff run and hopefully an NFC East title. 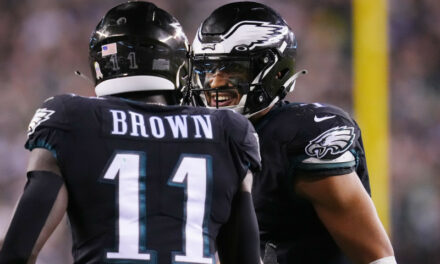