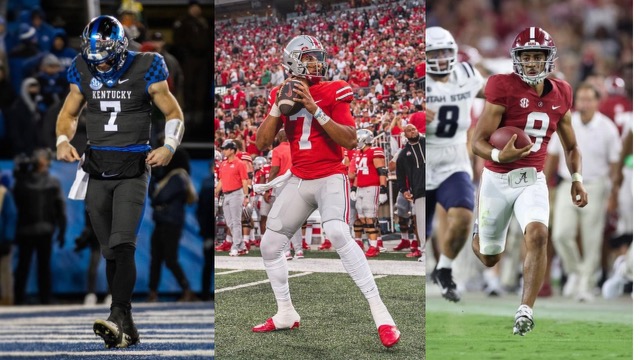 Welcome to the Total Sports Live NFL Draft notebook. Here we wil go over all the latest NFL Draft news you need to know every month through April. Let’s start by looking at this year’s quarterback class.

Last year’s Heisman winner has unique arm talent and athleticism. His 6-foot, 195 lb. frame has already been discussed, but it’s hard to argue his on-field attributes. Young and the Crimson Tide fell short of the College Football Playoffs and will face Kansas State in the Sugar Bowl.

Stroud is a rhythmic passer with a big arm and prototypical size for the position. Ohio State snuck into the playoffs after USC & TCU lost their respective conference championship games. Stroud was named a Heisman Trophy finalist this season, alongside Caleb Williams (USC), Max Duggan (TCU), and Stetson Bennett (UGA).

Levis is a strong-arm quarterback who transferred to Kentucky after beginning his career as a physical running threat at Penn State. Levis played in a pro-style offense at Kentucky and saw a lot of action under center. His strong arm and 6-foot-3, 232 lb. frame make him an imposing threat in the red zone.

While the conversation continues on the QB1s in the 2023 draft class, Shepherd University quarterback Tyson Bagent is the top quarterback in the Division II ranks. The 2021 Harlan Hill Trophy winner had opportunities to transfer to FBS programs last winter but opted to remain at Shepherd.

FB: Congratulations to Tyson Bagent, on yet another record! He now is the @NCAA career touchdown passes leader across all levels with 1️⃣5️⃣8️⃣!#PSACProud https://t.co/bdgZfRAqnx

Bagent was invited to the Senior Bowl after throwing for 41 touchdowns and 4,415 yards this season. Bagent led Shepherd to the Division II Semifinals after winning the PSAC East with a 14-2 overall record and a 7-0 record in conference.

Ohio State’s Dawand Jones and Tennessee’s Darnell Wright are talented right tackles. Jones is a towering 6-foot-8, 359 lb. tackle with long arms and a sturdy base in pass protection. Wright was named first-team All-SEC after winning the conference’s offensive lineman of the week twice this season. He is a versatile lineman who has played guard during his career.

Yes, can confirm that is good…@darnell_5232 was @PFF_College highest graded offensive tackle in Week 9 pic.twitter.com/LQW6C7LBKL

Meanwhile, Jones was one of the best offensive linemen in the country, as he was named to multiple All-American teams for his outstanding play in the trenches. The 6-foot-8 offensive lineman also accepted an invite to the Senior Bowl, which could help further his draft stock.

Ji’Ayir Brown continues to be a playmaker for Penn State’s secondary. Brown had six interceptions and was named third-team All-Big Ten last season, and he recorded three this season. Brown accepted invites to the Reese’s Senior Bowl and the East-West Shrine Bowl.

As @PennStateFball looks to rebound this week, I expect their defense to stand out vs. Indiana

Ventrell Miller is a high-volume tackler at middle linebacker for the Florida Gators. Miller was invited to the Senior Bowl after recording 74 total tackles and 8.5 tackles for loss this season. He was named a Comeback Player of the Year semifinalist after missing most of 2021 with a torn bicep.

Invite accepted ✔️ @ventrell_miller is headed to Mobile, AL for the @seniorbowl! pic.twitter.com/VKXeviIjZj

Andrei Iosivas generated buzz after an outstanding senior season at Princeton. Iosivas recorded 943 yards and seven touchdowns in ten games this season for the Tigers. The three-time All-American in Track & Field at Princeton will likely post blazing numbers in the pre-draft testing process. Iosivas was the first Princeton Tiger invited to the Senior Bowl since Caraun Reid in 2014.

Lafayette DE/OLB Malik Hamm joined the TSL Podcast earlier this month to discuss his illustrious college career and the upcoming draft process. Hamm won his second Patriot League Defensive Player of the Year award this season after recording 8.5 sacks and 12.5 tackles for loss. Hamm finished his collegiate career with 32 sacks, the most in Lafayette history.

The 2023 QB class will miss several notable draft-eligible quarterbacks who have opted to return to school next season. 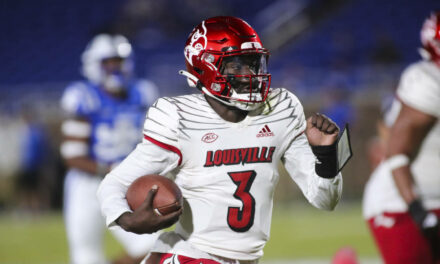 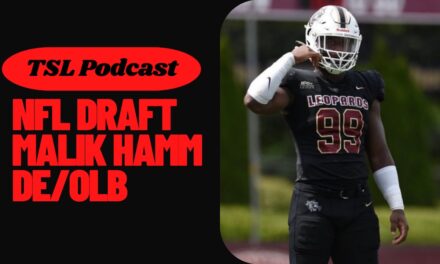